To 'Advertise' in Poker

To Advertise (Adv: to advertise) in poker is to represent a style of play or a particular hand. 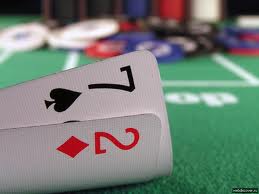 Sometimes this isn't an intentional action. Things a player says and does at the table can lead other players to working out what they hold. They would be said to be 'advertising their hand'. At other times, it's very intentional and done to extract more from your opponents. This is an important concept in poker as it can be rewarding to represent strength when you are weak, and weakness when you are strong.

To give you a few examples, let's assume you win a big pot and force someone off a hand and you show your cards - you show 2-7 off suit (which is always pleasing). Here you're advertising the fact that that you have a tendency to play weak hands and bluff. In essence you're advertising a wide range. Of course this can work against you the next time you try to represent a hand with face cards on the flop - you're more likely to get people sticking around. Looking at the reverse, you win a pot and you show your A-K. You then win a further pot and show A-A. You would be advertising to the table that you play premium hands - that you have a hand when you raise. If you saw two players play these hands - you'd be more likely to believe the A-K-10 had hit the player with the track record of playing premium hands. There's a benefit in showing you holdings at times as this can be useful in setting your opponents up for a trap. Until you're confident in your trapping abilities, it's best to keep you're opponents guessing. Showing cards is giving away free information.

Players can also advertise a particular hand (or a smaller range). Betting too hard at a pot can scare people away - remember, you want the mid range hands sticking about and paying you off, so it's important to keep your bet sizing in check.

It is a regular strategy to show the table that you're either a loose or aggressive player and then switch styles to through your opponents off balance. This is particularly true when playing against skilled players (not an ABC player). If you were to win three pots over the course of an hour and each time you showed a big pair, players would relate you to playing premium hands. The benefit is that if you then played a hand with 3-4 off-suit and the board hits high - you'd probably get away with it, as players would give you credit for the bet. When a low board hits and opponents think you only play premium hands, when you hit a flop you can win considerably more than you would have done had you not built the table image of a tight player.

I like to think of the concept as conditioning. It's the same as teaching a dog to sit down. Doing something over and over again and rewarding him with treats, conditions him that when he sits down, he gets a treat. At the table, you want your opponents to think the opposite of what you have. Show them that you keep bluffing them with garbage hands so that when you get a monster, they contribute more to the pot than they would otherwise have done with that hand. Show them monster hand after monster hand and they'll be tentative about sticking around when the board hits face cards - it doesn't matter that you hold 2-7.