Your Stack is King! 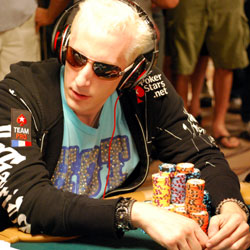 any given time. A player with a lot of chips in front of them would be considered to have a 'large stack' and a player with few chips would be said to have a 'small stack' or be 'short stacked'. Often a unit of twenty chips is also referred to as a stack as a typical chip rack holds five stacks of 20 chips (100 total).

The size of your stack is key in no limit games when declaring all in. The more chips you are pushing with, the more likely it folds round and you pick up the blinds. You can afford to be looser as a big stack with your chips than if you were an average or small stack.

For this reason that many players try to build a stack early, especially in tournament play.