Online Poker - Clash Of The Titans

Pundits are calling the latest head-to-head challenge between Viktor Blom (Isildur 1) and Tom Dwan (Durrr), the clash of the Titans. Admittedly this couple of poker pros are two of the most well-known online poker pros to play the high-stakes game in recent times. In fact the stakes they are regularly seen playing probably fit into the ‘nose-bleed’ category. 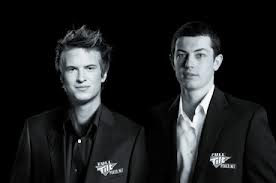 When we heard that both would be returning to their favourite online poker site as pros when it re-opened, none of us were surprised, being two of the biggers sensations to hit the game. They quite literally made poker history by playing in some of the most unforgettable games of all time at stakes that most of us wouldn't dream of playing. Not only that, but they are also two of the younger members of the poker phenom category. Now that they have joined Gus Hansen back at Full Tilt Poker (FTP) we expected big things of them, and apparently that’s what the rail-birds are starting to see.

Their very first series of heads-up contests took place at FTP somewhere around 2009, and this was more or less where the wider community started to sit up and take notice of Blom. Although at that time we only knew him as Isidur1, and he sure commanded a lot of attention through a hyper aggressive and fearless playing style. This furious fighting took place across multiple tables, day after day, and featured history-making poker pots. Many of the pots won by both players had quite simply never been seen at that level before.

Will these historic poker session be re-lived online once again, when the pair went head to head in the new year? Given the way they both play, we would expect nothing short of fireworks.

Compare the best heads up poker rooms or more generally the best online poker sites of 2013.