7 card stud Hi Low is certainly more popular in home games. In the online arena, finding a game with enough players can be a challenge, although there are games on the go (see which poker rooms offer 7 Card Stud Hi Low). This is usually the case with Hi Low variations as traditionally speaking, players don't like to share pots so favor the games where the best 5 card poker hand wins the whole pot. The Hi Low variation still takes into account the best traditional 5 card hand (see how poker hands compare in the traditional rankings) but the player with the best 'traditional' hand shares the pot with the best Ace to Five Lowball hand.

For a hand to qualify for the low pot, a player must have five cards where each card is not higher than an eight. Any five of a individuals seven cards may be played for high and any five can be played for low. 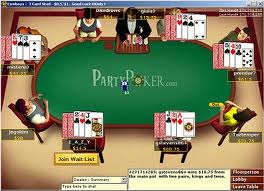 Other than the introduction of the low hand, the game is played the same way as 7 Card Stud - see how to play 7 Card Stud.

Remember: Players do not have to indicate whether they are playing for the high or low hand and to qualify for the low hand, no card in a players hand must be bigger than an eight. Players will have seven cards during the course of the hand, but only the best five card hand possible for each player, is used to determine the winner.

A few further things that are are worth consideration. Aces are played both high and low. Straights and flushes do not affect the value of a low hand. The is played with three cards being dealt first. If you play until the end the hand, you will finish with seven cards total, four face up and three face down. Let's take a look at the game structure:

Each player is dealt three cards, two face down and one face-up.

The lowest card starts the betting with a "bring in". The first betting round proceeds with the lower betting limit.

The dealer gives each remaining player a 2nd up card

The second betting round proceeds with the lower betting limit.

However, if any player's two up cards make a pair, then any player may make a bet equal to the higher betting limit. From this point on the higher limit is in effect for the entire hand.

The dealer gives each remaining player a 3rd up card

The 3rd betting round commences with the higher betting limit

The dealer gives each remaining player a 4th up card

The 4th betting round proceeds with the higher betting limit

The dealer gives each remaining player a 3rd card face down

At Showdown, the high hand and the low hand split the pot but only if a low hand qualifies. There will be times that there is no low hand and only a high hand wins. It is possible to win both high hand and low hand, even with the same five cards. For instance, you could have 4-5-6-7-8. This would qualify for the highest low hand and could be the highest high hand, should all players have lower cards than yours. A player that wins both hands is said to be 'scooping the pot'.

2. An ace is the highest card and also the lowest card.

4. Straights and flushes do not affect the value of a low hand.

6. Splitting pots is only determined by the cards and not by agreement among players.

7. When there is an odd chip in a pot, the chip goes to the high hand. If two players split the pot by tying for both the high and the low, the pot should be split as evenly as possible, and the player with the highest card by suit should receive the odd chip. When making this determination, all cards are used, not just the five cards used for the final hand played.