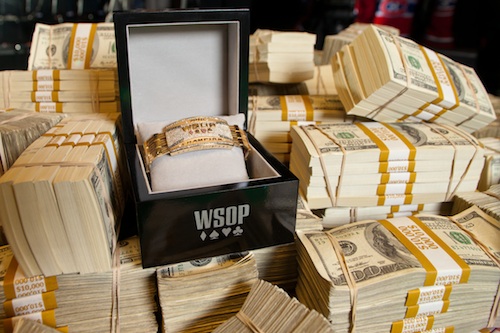 In 1949, gambling icon Benny Binion hosted a high-stakes poker marathon between famed gamblers Nicholas 'Nick the Greek' Dandolos, and Johnny Moss. Moss won "the biggest game in town" and an estimated $2 million pay packet. 21 years later Binion revived the event and dubbed it the "World Series of Poker". Again, Johnny Moss won. In 2004, a field of 2,576 entered the 35th Championship event, playing for a total prize pool of more than $49 million across 45 events. Every since, year on year the prize pools have grown and the popularity has exceeded most early expectations.

One of the big draws of such a series of events is the appeal that an ordinary player can before a World Champion. This happened in 2003 when Chris Moneymaker won the 2003 WSOP Championship having won his way to the main event through a $40 online satellite.

The set up of the tournament series is such that there are many different games played in the build up to the No-limit holdem main event. There are Omaha, 5 Card Stud, 7 Card Stud, 2-7 Lowball, even games such as 10-Game and H.O.R.S.E are featured. The winner of each event wins a WSOP Bracelet. 2015 saw the introduction of the first online WSOP bracelet. event.

There have been a great many bracelets given out over the years. Ever wondered who is at the top of the earners lists? Here are the most successful WSOP winners to date: