A satellite series which has been underway on Betfair Poker gives you a chance to qualify for a major live Tournament this month. It is the “Betfair Poker Live Prague 2013,” which will be taking place in the Card Casino in Prague from May 17-19. The event has a $100,000 guaranteed prize pool, with a buy-in of $650. There will also be a number of side events, including cash games, which will also be offered in Prague. 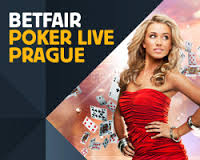 As the sponsor of the Prague tournament, Betfair offers a number of benefits to its members who enter the event. They will be offered the convenience of being able to buy in to the event directly through their Betfair account. They can also take part in the lavish hospitality that Befair will provide at the tournament, including a welcoming party.

There are a number of other bonuses and promotions offered by Betfair to its members who play in the Live Prague 2013 event, including special Freerolls. Betfair will also pay bonuses for success in the tournament. There will also be bounties given to any Betfair member who can eliminate one of Betfair’s pros from the event. The prize for this is a $120 entrance into the next tournament in the Betfair Live Series.

There are daily satellites and qualifiers now being offered for the Prague tournament in the Betfair Poker Room - but hurry as time is running out to qualify! You can enter them for as little as $.55. You can also buy-in to “Level 3” for $22. A victory at that level will get you into one of the “Final” qualifiers, which are held every Sunday at 21:00 GMT.

If you choose, you can skip the satellites and enter the weekly Sunday tournament directly, The buy-in is $120. One winner each week will receive the Prague prize package, a $1400 value which includes entry into the event.