Chicago is a fun game and in the same family as 7 Card Stud. The initial deal is identical to that of 7 Stud, with the dealer dealing two cards face down and one card face up to all players. There is a round of betting (the player with the lowest card must start the betting with either a bring-in bet or a full bet). Not a lot different so far. Where the game differs from it's parent game, is that at showdown, the high hand shares the pot with the highest spade. Should the player with the ace be last man standing, he takes the entire pot (also known as 'scooping the pot'). 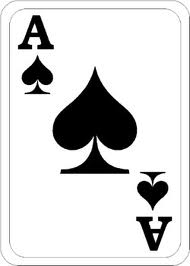 What makes this game unique, is that a player could have the worst hand possible but have the ace of spades in his/her hand guaranteeing that they win at least half the pot.. The game really revolves around who has the highest spade. The reason for this is that the player who has the ace of spades really can't lose and will often try to push the person who has the highest hand off the pot. The worst they can do is split the pot; the best win it outright.

A common play is for the person who has the ace of spades is to move in to push everyone off the hand, rather than let someone make a hand and share the pot. There is a great deal of bluffing in the game and it becomes more a game about trying to represent the ace. The tactic here is to play the game like you would a standard Low Limit Holdem game. That is to wait for the best hand (ace of spades) and then trap your opponents to get them to over commit to the pot.

The downfall of most players who play this game is that players do not have the patience to wait so generally there is always a high amount of money exchanging hands. As with any game in which there is a split on the pot, or at least the possibility, there is invariably a reduction in popularity. Poker players like winning pots outright, and that's a fact. This isn't one that you will find online at the moment (and likely never will) however it can be a fun game to feature in your home game set up.

Check our games section for listings of games played online.