Bluffing in poker can be very rewarding if you get it right. Bluff at the wrong pot and in a no limit game, it you can lose the lot. At the same time, you will never be successful unless you can pick up pots with the odd bluff. What we need to do is understand the right pots in which to bluff, or rather the pots that provide the best chances of successfully taking a pop at. Poker is a great game for many reasons, but one of my favorites is that you can win a huge pot with the worst cards possible. It is a bit of a cliche, but "its not what you hold in your hand, but what your opponent thinks you hold that counts". 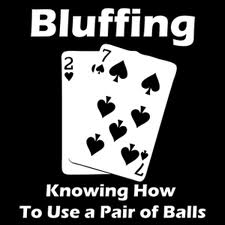 This is what makes the game so unique and great at the same time.

The concept of bluffing is to give the appearance that you hold a better hand than you actually do. To do so successfully, you need to play and bet in a manner that suggests that you hold a big hand (without being obvious that your stealing). There are techniques to doing this well. Experienced players use every trick in the book to get into the mind set of their opponent. With practice, you can be doing this too. To pull of the successful steal, you will need to bet into a pot and get your opponents to fold with a hand that would not win at showdown.

Learning the right spots to bluff at is key to ensuring that you aren't throwing money at pots that either offer little reward or aren't likely to succeed. Whilst getting caught on a big bluff doesn't do your table image any good, there are ways that you can use your table image to manipulate how players play against you.

Times when bluffing is a bad idea

Limit your bluffing when playing against low limit players and bad players playing at the higher stakes. They are not skilled enough to know that they are beat and often they will not pick up on any reverse tells. In fact they probably won't pick up that you have been folding for the last hour. Low skilled players are renowned for calling almost anything with a mere sniff. Against these players you want to get it in with the best hand and let them call.

Avoid bluffing into pots from early position. There are too many players behind you and chances are you will get at least one player with a hand. Similarly, don't bluff at a pot if there are more than three players in the hand. It is much easier to bluff one of two people out of a pot. Any more and you significantly increase your changes of getting unwanted action.

A common mistake that players make is bluffing at a pot with three, four or more players in the pot as they see the pot size as justification to keep in the hunt. Now sometimes it is worth a stab, particularly if other players seem to be checking it down. 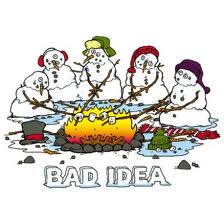 If you do decide to make a play for the pot and get called, tread carefully before firing a second bullet. If you don't have enough outs to warrant the play, you could have to fire a bullet on the turn and river, which could potentially be expensive. You may get away with it now and again, but you are taking more risks than you need to.

You also don't want to be making plays too often. If you continually bet into pots trying to bluff players, you will start to get more calls and will find it more difficult to bluff - this doesn't help your game, particularly in tournament play, in which you need to keep building your stack. A bluff is meant to be believable - the more you bluff the less believable it appears. Overdo it and players will think you are full of it and you will start to see players 3-betting figures against you increase.

Make a bluff when there is something worth stealing. I see players all too often making continued bluffs at small pots in which they risk significantly more money than is actually in the pot. Risk vs reward. Be selective where you bluff and bluff when it makes sense to do it. If there is not enough money in the pot there is no need to bluff at it. Winning a pot just for the sake of it is pointless and proves nothing. There will be times in any game when it pays to have a tight image. When the pot is big and everyone seems to have missed. You need your reputation in tact for these spots.

Limit your bluffing in games where you are playing a very loose table. If you have any number of calling stations at the table, you want to play with good starting hands and let your opponents call with worse hands. Take time to figure out your table before you start to to throw your weight around. Work out which players you want to target. Who are the weak players? Who is on tilt? Who are the good players?

Bluffing as soon as you sit down to a table can also lead players to give you less respect. Play good solid poker and earn the respect of the players. Build your image and then let your image work for you. Once they have your respect, it will be easier to take pots away from them.

When Bluffing is the Right Move

Ok, enough of telling you what not to do. Now for what the right spots are.

Bluff a pot where the board (board cards) indicates that someone could have a big hand and there are only one or two in the hand. If there is no potential on the board and you try to represent a big hand, you are far less likely to be believed. For instance, a potential straight on the board and no-one has bet - take a stab at the pot and try to represent that you have hit the straight, assuming that there is enough money in the pot. Remember, the amount you bet needs to reinforce the play you are trying to get your opponent to believe. It is also much better to take a stab at pots when you have outs. This is know as a semi-bluff, as you are bluffing but could still hit a winning card.

Bluff against tight players. These players are very selective in the hands they get involved with. These players will tend to stick to premium poker hands and will often look for a reason to fold. Give them one. They will fold way more than they will call, so keep the pressure up.

You also want to bet out when the opponent's betting pattern suggests the opponent may have a marginal hand. You may pick up that the betting pattern suggests your opponent may have a drawing hand or has likely missed the board. This isn't something you will know without paying attention and working out your opponents starting hand ranges. Once you have figured out that your opponent only really gets involved with face cards, and the board is low - this is perfect for a bluff.

Making a play against players that you have information on will increase your chances of pulling of a successful bluff. Taking notes on players will give you an insight into how someone plays (that you might otherwise have forgotten). Learn as much as you can, take player notes, mark players - document their betting patterns, their behaviors, any potential weaknesses - their strengths. Use a HUD to collect all the key information. It's all information that can be used next time you run into them.

If you have been caught with your hand in the cookie jar, which will happen, you will be more likely to get called next time you bluff a pot. Use this to your advantage, especially when you actually wake up with a hand the second time. Making it look like a bluff will help induce one of your opponents to play back at you. No player likes to be bluffed too much. It regularly happens that soon after you get caught bluffing you hit a big hand the very next hand. These are perfect spots to make it look like a steal. Make your plays work for you.

I mentioned playing position early in the article - you should be trying to pick up the blinds when you are in late position, especially when all players have thrown away their cards and there are one or two players left in the hand. Picking up cheap pots is an essential part of the game, for the reason as you are not risking much, and are increasing your stack. You have a much better chance of stealing from late position as there are less players to play behind you. The only time to be careful if if you have a player who tends to favor defending rather than folding.

The 'pure bluff' or 'stone cold bluff' is a bet into a pot where there are no cards that could be dealt to improve your hand. For a pure bluff to be successful, all other players need to fold their cards. This type of play is often used effectively when there is a substantial pot size and there is reason to believe that the bet will make everyone fold (if your opponents are not strong enough to call). The pot odds for a bluff is the ratio of the size of bluff to the pot. This play will be profitable in the long run when the probability of being called by an opponent is lower than the pot odds (see guide on calculating pot odds).

The 'semi bluff' is more commonly used in the earlier betting rounds when a player has the chance of improving their hand. For instance, a player might hold a flush draw, post flop. If you have a drawing hand and you bet into a pot, this would be a semi bluff. If the hand ended right away you wouldn't have made your hand. You need to improve and you have cards that can make you a likely winning hand. Semi bluffing provides more security as even if you are called, you could catch one of your outs to win the pot at showdown. You could also bet and all players fold - so twice the opportunity to win the pot.

For more on the subject, check out this guide or visit our poker guides section or if you are ready to get into the action. Check out our best poker deals available today.