To Call a bet in Poker

To 'call' a bet in poker (also known as 'making the call', 'calling down' or 'looking him up') is the action in which a player matches an opponents bet to stay in the hand. There are five different actions that a player has the option to use - these are to fold, to call, raise, re-raise or to check. 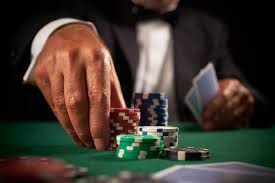 Checking and calling are seen as weak actions with raising and re-raising as a sign of strength. The idea of the game is simple. Either have the best hand at showdown or get other players to fold - either way you win the pot. Unfortunately, it's not going to be easy having the best hand each time, so players will often show aggression (.i.e. that they have a big hand) when actually they don't have much at all.

Where a player is calling a bet, whilst it might be seen as a weaker action than raising, it's no guarantee that the player is not sitting on a monster hand. Very often players who have a strong holding will make themselves look weak to induce play. The reason for this - if you're opponents think you have a big hand, they're not going to commit much to the pot.

So when a player before you puts in a bet, you have the option to match his bet, fold or raise. In most card rooms there's a limit as to how many re-raises players can make. It's best to check the rules in your local card room.

Let's look at an example - you are playing in a no-limit Holdem game and are third to act. You look down and see AhKd and with no raises pre-flop - the board comes A-3-9 rainbow. Player one checks (makes no bet). Player 2 then puts in a bet of $30 and with the blinds, there is now $35 in the pot. You now have to make the decision as to whether to continue in the hand or fold and leave the game. If you fold now, you lose any chance of winning the pot and play no further part of the hand. To stay in the hand, you need to at least match the bet. You would be said to 'Call the Bet' - that means matching the $30 put in by your opponent. In this spot you wouldn't be nervous of the flush of straight. You'd only be wary of two pair or a player hitting a set. This is a regular type of decision in which you have top pair and are probably still good. The decision will either be to call, raise or fold.