The term 'all-in' is where a player bets everything they have on the table in a hand. A player would be said to be 'all in' - meaning there was no more that they could do in the hand besides wait for the showdown. 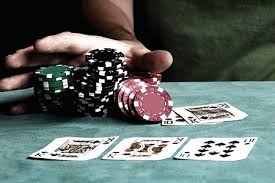 The decision to bet the lot can either be an aggressive play to get players to fold or in calling a bet from another player.

In respect to the all in player - the player cannot win more than the value of the chips committed. For instance, if player A went all in for $1,000 with two players behind him, Player B re-raises to $10,000 and player C also called the $10,000 bet. The most that player A could win would be $3,000 - the value of his remaining chips, from each player. In this instance $3,000 would be put into one pot (against all 3 players) and players B and C would also play for a 'side pot' - in this case $18,000 (so far). Any further betting between players B and C would be added to the $18,000 side pot (no more to the side pot). All that player A can win is the main pot of $3,000, regardless of any other betting. If player B or C were to win, they would take down the side pot and the main of of $3,000. If player A won, he would win the main pot and the player with the best hand out of players B and C would win the side pot.

There is a real advantage at times to 'moving all in'. Players usually do it when they are low on chips and don't have enough of a stack to make a raise and fold. One advantage of pushing in is that there are no more decisions to be made. Similarly, it takes away the bluff from another player. Let's look at an example where this could be the case. You hold AK in a tournament. Blinds are 1000 - 2000. Action folds to you. You decide to min raise to 4000. You get two callers, players B and C. The board comes 10-8-2. Player B pushes all in for 16000. Action is on you. What do you do? With only 6000 left - you might consider folding. You know he generally bets with a hand and with player C still to act, you reluctantly fold. Player B calls. Cards over. Player B has Q-10 and Player B has 8-J. The turn comes A. The river 4. This is a perfect example of where the better play would have been to push in - in this example, you would have won - that won't always be the case however you need to make a stand somewhere - that way you take away the option of folding on the flop away.

The added advantage is that moving in may force everyone else out of the pot without having to face a showdown. Very often players will do this to pick up the blinds - more so in the later rounds of tournament play (best played in late position).

Other All In Scenarios

If a player doesn't have enough money to cover the ante and blinds for the coming hand, the player would be all-in and could only win what he did cover, from each person in the hand. Any money the player holds would be applied to the ante first, and if the full ante is covered, the remaining money is applied towards the blinds, and then the pot.

If a player was to become all in before the deal for part of the ante or part of the blinds then in similar fashion, every other player in the hand would contribute the exact same amount of ante to the main pot with anything remaining going to a side pot - the key is that the player all in cannot win more than he/she contributes to the pot under any circumstance - this means that the all-in player would have a limit on what he could win in that hand.

There is one additional rule used particularly in online poker and this is that when all players in the pot are all in, all players cards should be overturned (revealed) before any more cards are dealt. When all cards are turned up, the remaining cards are with the pot going to the player with the best hand.